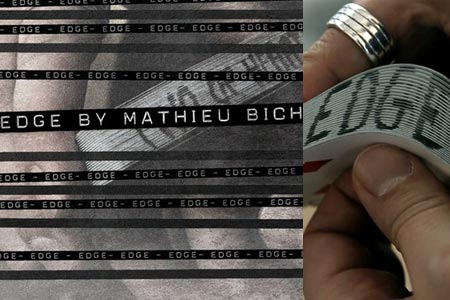 As your finger gently glides along the edge, the name of their selected card appears written in permanent ink. A masterpiece 450 years in the making. In 1563, Giambattista della Porta published a manuscript titled "De Furtivis Literarum Notis." Within that manuscript, Porta described a means to reveal hidden messages on the side edge of playing cards. Based on research at the Conjuring Arts Research Center, the concept of hidden messages on playing cards was also used as a secret code during World War I. EDGE by Mathieu Bich builds upon that history in a new, groundbreaking direction, allowing you to reveal selected cards, names, or predictions. Instantly resets - and it's almost entirely self working. With Edge, you can cause writing to appear, disappear, or even change: visually. The applications are limitless: you can write ANYTHING you want to reveal or predict. ANY language. ANY words. Whatever you want to write. Includes the special Bicycle deck and everything you need to perform the effect. Taught in 34 minutes of instruction by Mathieu Bich. After release of this effect, we learned that Tom Gagnon published a similar concept in 1994. While Edge was created independently by Mathieu Bich in July of 2000, we extend full credit to Tom Gagnon as the first to publish an effect similar in technique and method to Edge.
Return to the catalogue