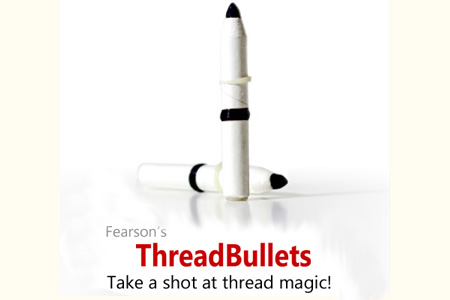 Do you want to get into thread work but don't know how to start? Are you a worker who just doesn't have the time to mess with thread and the complicated devices that go along with it? We have exactly what you're looking for... Fearson's Thread Bullets are the EASY way to get into levitation and thread work! FAST AND FEARLESS! Steve Fearson has turned the world of levitations upside-down repeatedly throughout his career. This time he's taking aim straight at the heart of invisible thread work with the Thread Bullet. More than 10 years in the making, we believe it is the most elegant and functional thread management system conceivable. NO MORE STRIPPING THREAD... EVER Normally invisible thread has to be stripped or "peeled". This can be quite a chore. The Thread Bullet eliminates peeling completely, leaving you free to concentrate on your performance. Every Thread Bullet comes pre-loaded with a full 40 feet of invisible thread. Pre-stripped, set and ready to use! INTELLIGENT LOCKING SYSTEM The Thread Bullet is able to dispense a length of thread smoothly and silently, LOCKING it in place at any time... AUTOMATICALLY! Need a bit more? Just tug and the Thread Bullet responds by releasing only what you need, keeping the thread at the perfect tension the entire time and again locking automatically. Automatic locking allows you to work the thread without tension, necessary to properly perform some of the most popular thread effects. You can work with the thread indefinitely until it breaks or you can RESPOOL it to store for later and the Thread Bullet will remember EXACTLY how much you were working with. Right down to the inch. So when you're ready to perform again it will release the exact length and STOP. ECO-FRIENDLY DESIGN FEATURING BIO-SPOOLS When you finally run out of thread (you will eventually), just toss the empty bio-spool in the trash. Yes, they're disposable and biodegradable which makes them environmentally friendly. It may be hard to picture a landfill full of invisible thread... but every little bit helps! Just pull off what you need, use it until it breaks and repeat. Do this over and over until you run out (you will eventually)... and throw the spool away! It's the simplest thread manager imaginable. REFILL YOUR EXISTING ITR OR ELECTRONIC REEL Thread Bullets are the best way to refill your other devices, especially the electronic reels. You can pull the entire strand into the reel and just toss the Thread Bullet away. Or respool your Thread Bullet with some thread and continue to take advantage of it's convenience and features. INGENIOUS, MINIMALIST, FUNCTIONAL DESIGN We sell a lot of thread and we're proud to offer such a fully-featured device in an environmentally-friendly package. Small enough to fit in a thumb tip, the Thread Bullet is the ultimate tool for the discerning thread-worker. Take care of it and It can last indefinitely. (Just don't get it wet after Midnight.) Special Bonus: Your purchase includes access to a Thread Bullet tutorial video featuring Steve Fearson's new Birthday Suit hookup. It's a hands-free hookup that needs no pockets, no special clothing at all. You can do it in your birthday suit. In fact, you could shave your entire body from head to toe and still do it. You're going to LOVE this! Use it to float playing cards, bills, etc.
Return to the catalogue