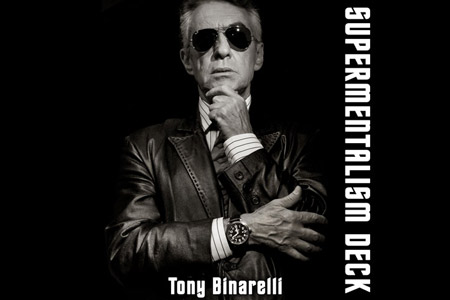 This is a magical masterpiece from one of the greatest minds in magic.

Tony Binarelli developed this effect more than 30 years ago and refined it to perfection. In collaboration with Card-Shark and produced in Parlour Size cards, this effect can be performed Close-Up as well as on Stage. Dual Reality as ist best!

A spectator is blindfolded while the mentalist asks three different persons sitting in the audience to choose three cards that are subsequently shuffled with the rest. The blindfold is removed. Without any sleight of hands, just by fanning slowly through the cards, the spectator will spot and remove the chosen cards himself from the deck.

The selections appear to be enormously increased in size for the spectator while they still look totally normal for the audience. An unexplainable effect.

Cigarette through coin - 1 € One