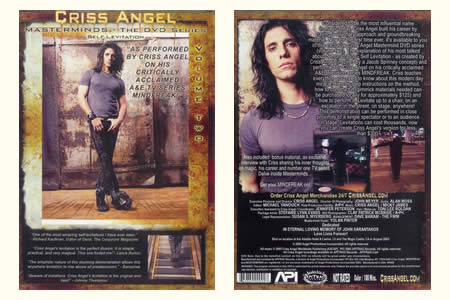 Considered to be the most influential name in magic today, Criss Angel built his career by having a visionary approach and groundbreaking material.
Now for the first time ever, it’s available to you, in his exclusive Criss Angel Mastermind DVD series (volume two).

The explanation of his most talked about demonstration - Self Levitation - as created by Criss Angel (inspired by a Jacob Spinney concept) and performed by Criss Angel on his critically acclaimed A&E television series MINDFREAK.

Criss teaches everything you need to know about this modern day miracle; step-by-step instructions on the method, how to construct it (gimmick materials needed can be purchased locally for approximately $125) and how to perform it.

Levitate up to a chair, on an escalator, in the street, on stage, anywhere!

This demonstration can be performed in close proximity to a single spectator or to an audience on stage. Levitations can cost thousands, now you can create Criss Angel's version for less than $300.


Also included: bonus material, an exclusive interview with Criss sharing his inner thoughts on magic, his career, and number one TV series. You will not be disappointed-there is a lot of information on this DVD!

"One of the most amazing self-levitations I have ever seen."
Richard Kaufman

"Criss Angel's levitation is the perfect illusion. It is simple, practical, and very magical. This one fooled me!"
Lance Burton

"The simplistic nature of this stunning demonstration allows this anywhere levitation to rise above all predecessors."
Banachek

"Beware of imitations. Criss Angel's levitation is the original and best!"
Johnny Thompson