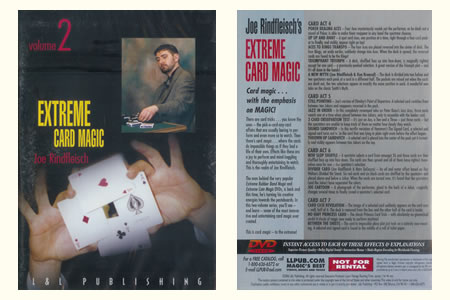 There are card tricks... you know the ones – the pick-a-card-any-card affairs that are usually boring to perform and even more so to watch.

Then there’s card magic... where the cards do impossible things as if they had a life of their own.

Effects like these are a joy to perform and mind-boggling and thoroughly entertaining to watch. This is the realm of Joe Rindfleisch.

The man behind the very popular Extreme Rubber Band Magic and Extreme Coin Magic DVDs, is back and this time, he’s turning his creative energies towards the pasteboards.

In this two-volume series, you’ll see – and learn – some of the most innovative and intertaining card magic ever created.

This is card magic – to the extreme!