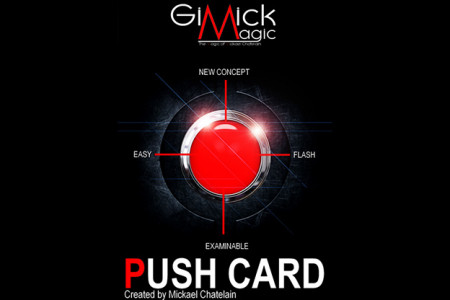 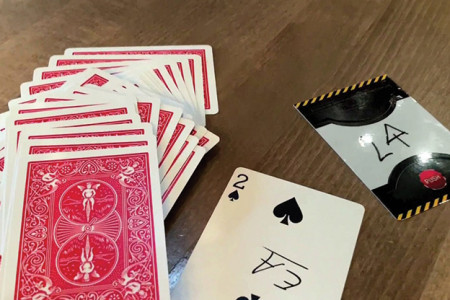 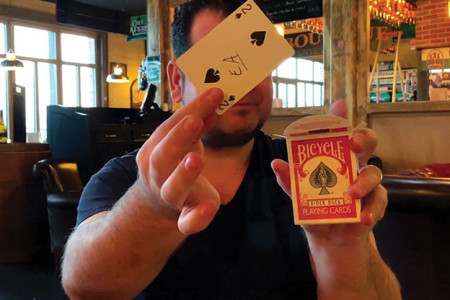 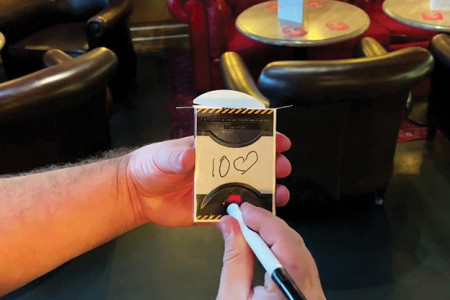 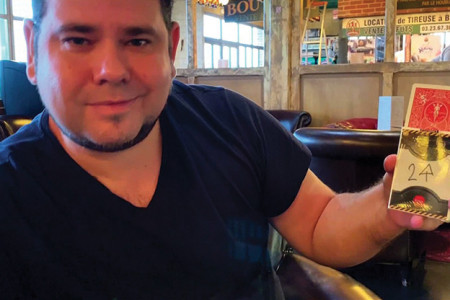 A great classic of magic in a brand new version!

A lightning-fast Rising Card! This is PUSH CARD : "The Houlette for a New Generation"

Take out your deck of cards. It's ordinary and the cards are different. Show it freely from all sides. Show the case that is on the table. It's completely ordinary.

Invite your spectator to choose a random card from the deck. ABSOLUTELY no force! Have the spectator sign the card to assure that it's completely unique. After several shuffles, the card is lost deep in the deck. With no suspicious moves, the deck is replaced in its case. No one except the spectator knows the identity of the selected card.

You now take out a small plastic card which the spectator examines. It's a white plastic card with a red button labeled "PUSH." That aside, the card is ordinary.
Ask your spectator to write the name of his card on the plastic card in big letters in the middle of the white surface. Let's say he signs the Five of Clubs.

Take the open case in the left hand. The cards are plainly visible inside the case. Gently shake the case to position the card (you say). The spectator himself can also shake the case with the cards inside. Take the plastic card and slide it under the cellophane or simply hold it against the case.

Point to the red PUSH button at the bottom of the plastic card.

Push the button.
INSTANTLY, a card jumps from the deck.

The card comes out at lightning speed, surprising and even startling your spectators!

"So you wrote the Five of Clubs, did you?"
Turn over the card that's just flown from the deck. It is indeed the Five of Clubs, the very SIGNED card FREELY selected by your spectator at the beginning of the trick.
Remove the deck from the case and allow it to be examined. All is ORDINARY!

Let me stress these points:
Return to the catalogue