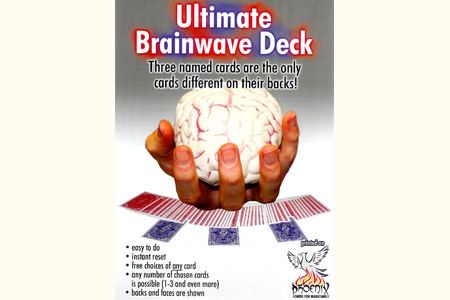 For the first time ever you can get a deck containing 104 cards that matches perfectly a professionally produced card deck. This allows new effects never possible before. Because a spectator will never expect that underneath the first 52 cards (54 with Jokers) is waiting another complete deck of playing cards.

This is the cleanest approach to a Brainwave Deck ever :

- You take a red deck out of a red card case (also available in blue back version).
- You can show all faces as you really have a complete deck.
- Let your spectators name any card they want, or - even better - ask three different spectators for three different cards.
- No force, no stooges, no sleights!
- You spread the deck to find the three named cards.
- Take out the three cards and place them in front of the deck.
- Turn over the deck and spread it openly to show a complete red deck.
- Then - one by one - turn over the chosen cards to show that they are all blue!

This is by far the cleanest, fairest and easiest Brainwave effect. Other presentations are possible, perhaps you can also reveal a single card only. You could even spot the selected cards from the back as the backs are marked. Your creativity will be your limitation.
Return to the catalogue