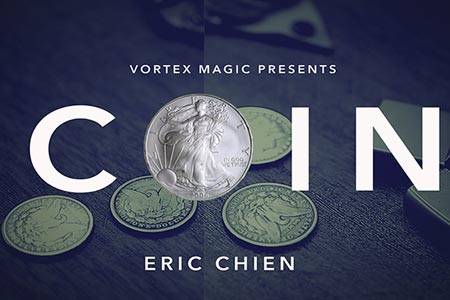 Eric Chien has been impressing top coin workers around the world with his performances of incredible sleight-of-hand magic. Some are saying he has created the best vanish in the world of a single coin.

He has spent years working and creating the most amazing visual magic using a single coin and is now ready to share it with other magicians. What looks like camera trickery can actually be performed without any gimmicks and only one coin.

COIN is the first time Eric has agreed to release any of his original handlings to the magic community and in this DVD he teaches his own incredible coin vanish as well as signature routines such as Dollar Coin to Signed Card and his handling on Coin To Cigarette which has fooled the best magicians in the world.

This DVD will also inspire you to take his work and combine it with other routines that you already perform.

INCLUDED ON THIS DVD: