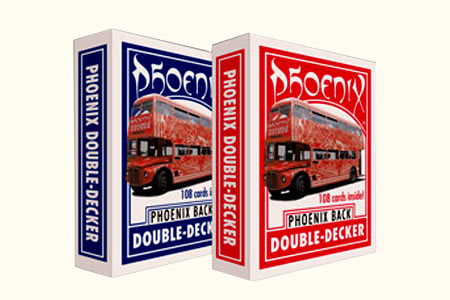 The booklet will be updated from time to time as new ideas are added. These are the routines already described in the booklet:

Key features of the Phoenix Double-Decker:

- The cards of the Double-Decker are so ultrathin that two complete decks incl. Jokers fit into a regular cardcase!
- Design, playing card size and corner roundings exactly match the regular Phoenix Deck
- Cardcase of the Double-Decker is produced at US Playing Card Company to match the cardcase of the regular Phoenix Deck and allows an easy deckswitch
- The backs are marked like the Phoenix Marked Deck and therefore allows additional handlings
- The Double-Decker can be ordered in several combinations and allows applications acording to the Phil Deck, Trilogy etc.
- Roughing the cards will add a little thickness to the cards, but still 104 cards fit into the cardcase. For easily roughing the cards we invented the Phoenix Spray Grid that holds the thin cards in their position during the preparation
- Glueing cards in pairs is also possible, the added thickness does not prevent to still put the two full decks into the cardcase.

You will get here two red decks in one red card case.
Return to the catalogue