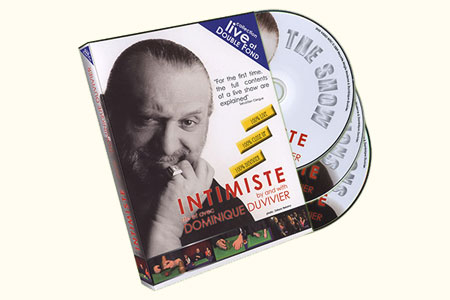 We can recognize masterpieces from the precision given to details: With Duvivier, we remain speechless in front of the structure of his performances based on a diabolical choreography naturally linking steps ahead of the audience. A great lesson.
David Stone

As a rocket, Dominique has been developing his very own spirit of Magic... Some of his favourite shows are called "INTIMISTE".... All of them are "state of the Art" and a great source of inspiration... This is just real Magic...
Gaëtan Bloom

One of the most creative thinkers and performers in magic.
Paul Gertner

Dominique Duvivier is a grand master of close up magic. He is to French close up magic what Juan Tamariz is to Spanish close up magic. If you ever are in Paris you simply must see Dominique perform at the Double Fond. The theater is perfect. The performance legendary. The show is incredibly deceptive and funny. But as I watched the show I had the realization that Dominique had carefully planned through extremely careful consideration every word, action and nuance that takes his show to the highest heights of close up magic. After the show I was shocked to find out that Dominique performs an entirely new show each year and that I'd just witnessed his first performance of the new show... I couldn't believe his first performance of a new show was perfection. But that's Dominique. He lives and breathes magic. This DVD set documents his show in minute detail and is your opportunity to live and breathe Dominique's magic with him. It's a rare opportunity to spend time with a grand master that will elevate your magic to new heights."
Bob Kohler

This new series of DVD should be watched like a documentary. For the first time, the full contents of a live show are explained - not just the effects themselves, but every detail that turns a succession of tricks into a show: the full set-up shown in real time, the construction of the props, the various "outs", alternate handlings, etc. It is the closest thing to being part of a live session, with an unparalleled level of detail - an opportunity not to be missed.
Sebastien Clergue

I have the deepest respect and the highest admiration for Dominique Duvivier. He is one of my masters and I am proud of it. His magic is an incredible collection of masterpieces and unending source of inspiration for close-up men all over the world. Very few top magicians can be called geniuses. Dominique is one of them. But above all, he is an Artist with a big "A". If you come to Paris, go and see him live at the "Double Fond". It is an experience of a lifetime.
Boris Wild

But Beware... Danger!!! The most beautiful danger, the passion. You, who will read these lines, you could be either a beginner or a confirmed magician, you will fall under the charm and the ascendancy of the magic universe of an bewitching, visionary and so personal creator that it will be surely difficult to recover from that... At the same time, what a best way to approach an Art, whatever it is!
Gaëtan Bloom

Imagine a man whose aim in life is to help others lose their understanding of the world for a few moments, that man is Dominique Duvivier. My friend Dominique is like the spider; he spends his days spinning a powerful but invisible web of secrets and mysteries. Being trapped in his web is a privilege - he has been watching you with his 1000 eyes, knowing what you will think, understanding your next move before you do. He deceives you with his eight arms, reaching around the things you know and believe, approaching you from every side at the same moment. And when he goes in for the kill, there is no use in struggling, you will be fooled. You would be wise to be a little careful, smart to be a little afraid and correct to be very thankful that he chooses to share some of his deadly secrets with the rest of us.
Michael Weber

Dominique opened the show and knocked everyone for a loop with several of the routines from his book. In fact, his performance was so successful, that most of the audience left when he did, feeling that everything else would be anti-climatic.
Michael Close

To close up aficianados, Dominique Duvivier is a legend. His seamless routines, coupled with inspired imagination and diabolical methods, have made him a top entertainer in the world today.
Nick Ruggiero