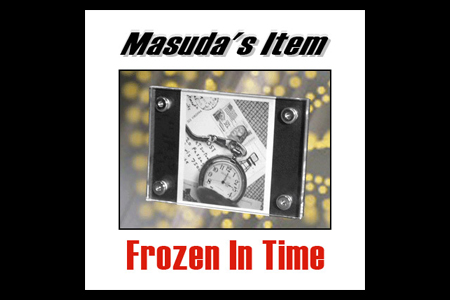 Masuda's Legendary masterpiece, Frozen in Time, is finally back.

In 1998, Masuda performed this magic on television for the first time ever.

This outstanding magic seriously produces a deep impact on your entire audience. Even other magicians will not believe what they have just seen in front of their own eyes.

The reveal is a very shocking moment -- people have never seen this kind of magic before.

Frozen in Time never been frozen... Back by popular demand, with its brilliant design and fine texture.

Place a photo frame containing a picture of a pocket watch, on the table, facing down.

Now, ask the spectator to name their favorite hour.

Then, the photo inside the photo frame is revealed... The time on the watch in the photo exactly matches the spectator's chosen hour...

A prediction using a photo, which is as known as an untransmutable object, has a huge impact.

This photo frame is thick and super-clear acrylic. A real screw (not an imitation) is used to securely secure the frame on each corner.

Because of its luxury appearance, this is a first class item even as an interior accessory.

We're proud to be announce that Frozen in Time New Edition has the highest quality in terms of appearance, mechanism and, most important of all, structure.
Return to the catalogue