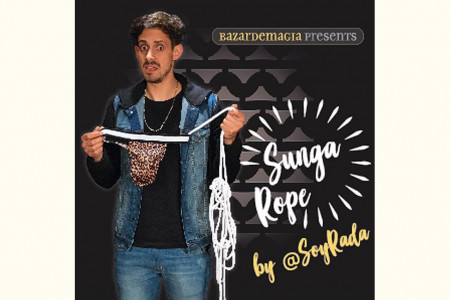 A classic effect and quite funny! During his performance, the magician notes that a piece of rope is hanging from his jacket sleeve. He pulls from the rope s end and some 5 meters of rope emerge from his sleeve, until the moment when the rope gets stuck.

The magician looks down and discovers the rope s other end coming out of his left trouser. When he pulls from this other end, the rope in his sleeve goes up and then appears from his trouser leg, til it gets stuck once more.

The rope s other end comes out of his trousers right leg and, when the magician pulls from it, the rope slides to its end and, once more, it gets stuck.

Finally, frustrated, the performer gives the rope a strong pull and everyone is surprised to see a sunga hanging from the rope s end!

• Bazar De Magia quality
• The gimmicked rope is included.
• Suitable for any type of comic performance.