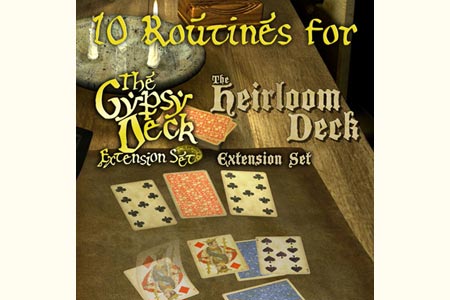 Double Trouble!
Two selected cards magically turn face-up and change places. Then the performer proves he knew and had predicted exactly what the freely selected cards would be!

Thought Transpo
Two packets of 6 cards are counted off the deck. Both are shown to consist solely of picture cards. A spectator mentally selects a card form one packet. Instantly it vanishes and re-appears in the other packet. Oh, and no palming!

Printers Wild
A blank on both sides card is displayed, which the performer claims can be printed to look like any card in the deck. A card is then selected and sure enough, by rubbing the selection of both sides of the blank in prints into a complete duplicate of the selection.

Killer Double Prediction
The magician writes down as a prediction the names of 2 playing cards. A spectator is given a random card and pushes it face-down anywhere he chooses into a face-up deck. The cards are spread and the two cards either side of the reversed card are removed. They are the predicted cards!

Emotional Bonding
A couple who are in a relationship or engaged/married is chosen. Each of them signs a playing card, and both cards are fairly lost. Whilst the deck is out of the performer's hands each person shows his occasional dominance in the relationship by causing his card to stand out from the rest (it turns face up). This is accomplished without ANY suspicion of sleight-of-hand on the performer's part. The spectators now re-affirm their bond by holding the deck between them. Their signed cards are now shown to be permanently bonded together back to back.

Open Predicament
The performer makes an open prediction, either verbally or in written form, of a specific card, e.g. the Six of Diamonds. He then deals through the entire deck turning every card face-up except for a single selected card which is left face-down. It is a free choice and the spectator can change his mind as much as he likes. Nevertheless, when the deck is spread the only reversed card is the predicted Six of Diamonds!

Pocket Monte
Two cards change places whilst they are in the pockets of the performer and the spectator.

A Murder Mystery!
The 4 Kings are shown front and back and examined by the spectators. A spectator chooses one as a murder victim and one as the murderer. When the cards are examined again, the chosen victim, the KH is fading from the card and has a sword through his back, whilst the murderer, the KD, now has the word 'KILLER' scrawled across it!

The "We're Lovin' It" Aces
Four Aces gather impossibly inside the card case.