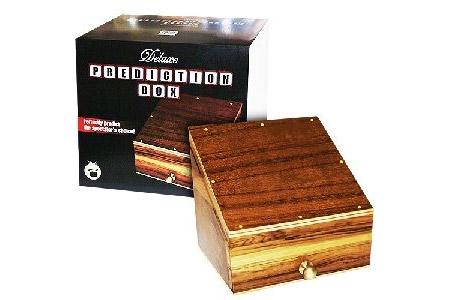 Here is a versatile sure fire prediction that will amaze any kind of audience.

The magician shows the audience a beautiful wooden box. Inside there are 6 cubes each with a different image on them (for example ESP symbols). He then asks a spectator to look at the symbols, close his eyes and simply think of one of the them.

While he is doing so, the magician writes down a prediction on a piece of paper, folds it up and puts it inside a large empty draw that is pulled out from the box.

Now while the magician’s back is turned, the spectator is asked to take the wooden cube with his thought of symbol, and without saying anything, show it to the audience. He is then instructed to close the box and hide the wooden cube in his hand.

Now the magician turns around again, and asks a second spectator to pull out the draw, and take out his prediction. When the prediction is shown, it is seen to perfectly match the symbol that the spectator had simply thought of!

This is a new improved version the popular Jewel production box that allows you to:

- Put the prediction in the draw during the performance.
- Have a spectator pull out the draw and pick up the prediction at the end. The draw will be seen containing just the correct prediction.
- Perform to any kind of audience, and also to children, as besides the ESP symbols, also stickers with colors, numbers, fruits, and animals have been supplied.
- The box measures cm 22,2 (8,7 ) x 16,7 (6,6 ) x 19,6 (7,7 ).
Return to the catalogue