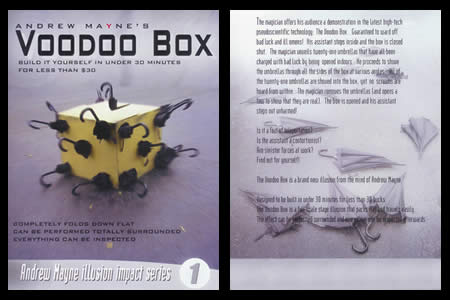 Andrew Mayne presents a practical, radical twist on a classic illusion. It's both a great starter illusion and useful part of a professional repatoire.

The magician offers his audience a demonstration in the latest high-tech pseudoscientific technology: The Voodoo Box. Guaranteed to ward off bad luck and ill omens! His assistant steps inside and the box is closed shut. The magician unveils twenty-one umbrellas that have all been opened indoors. He proceeds to shove the umbrellas through all the sides of the box at various angles. All twenty-one umbrellas are shoved into the box, yet no screams are heard from within. The magician removes the umbrellas (and opens a few to show that they are real). The box is opened and his assistant steps out unharmed!

Is it a feat of teleportation? Is the assistant a contortionist? Are sinister forces at work? Find out for yourself!

Designed to be built in under 30 minutes for less than 30 bucks, the Voodoo Box is a full scale stage illusion that packs flat and travels easily. The effect can be performed surrounded and everything can be inspected afterwards.
Return to the catalogue